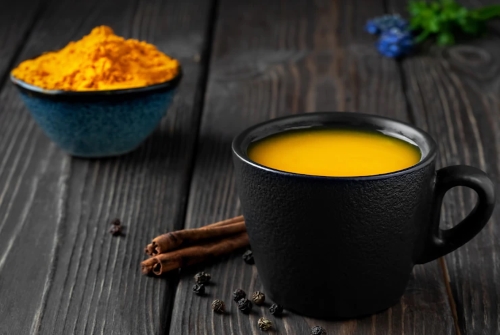 Turmeric has been used for ages in India. Even Ayurvedic medications contain the addition of these vibrant yellow roots. All Indian kitchens use turmeric, which is a common spice.

Turmeric tea is a nutritious and restorative beverage. Coughs can range from sore, dry coughs to coughs that generate mucus and pressure in the chest.

A recipe for inflammation and coughing that has been handed down through the years is this straightforward turmeric tea. Inflamed airways will be soothed, and the mucus will be broken up to help you feel better more quickly.

Always use GI-tagged or organic ground turmeric for the tea. Metanil yellow, a coloring additive, is occasionally added to turmeric in packaged form. Therefore, it is preferable to have organic or unadulterated ground turmeric.

Turmeric and Other Spices’ Health Benefits

Curcumin, a compound found in turmeric, has potent anti-inflammatory and antioxidant properties. It improves skin quality and immunity. Either fresh turmeric roots or ground turmeric powder can be used in the recipe.

Aromatic Ceylon cinnamon possesses anti-inflammatory, antioxidant, and antibacterial effects. Additionally, it improves immunity. Please remember to never use cassia cinnamon in any recipe; only use genuine cinnamon or Ceylon cinnamon.

Ginger: Gingerol, which is found in the roots of the plant, has powerful anti-inflammatory and antioxidant properties. Additionally, ginger improves in digestion, lessens motion sickness, and relieves cough and cold symptoms. You can use either fresh ginger root or ginger powder in this recipe.