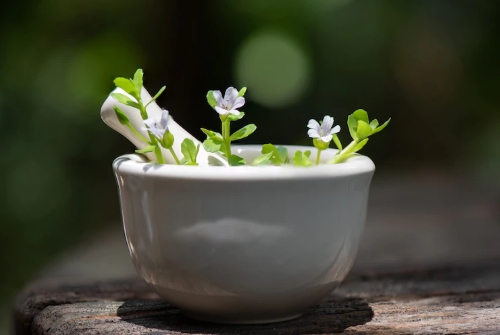 Alternative medicine usage has considerably expanded on a global scale. There is always a need for safe and effective medications, and research is ongoing to find new applications for existing medications. Brahmi is a herb that has been utilised for ages in Ayurvedic medicine. Since the time of the Vedas, brahmi has been considered to be one of the most sattvic herbs. In this article, we’ll go in-depth into the Brahmi plant, its science, its use in Ayurveda, and much more.

Both in developed and emerging nations, the usage of herbal products have dramatically expanded in recent years. Brahmi is a significant medicinal herb that has been used extensively for therapeutic purposes in the East and is gaining popularity in the West. Lord Brahma or “Brahman” is the source of the Sanskrit word “Brahmi.” The Hindu term for the collective consciousness is Brahman, and Lord Brahma is the divinity responsible for all of the world’s creative energies. Brahmi literally translates as Brahma’s vitality (or “Shakti”). Brahmi therefore has a lot to offer the medical community.

Thus, Brahmi protects us from a variety of diseases of different organ systems.

Too much anxiety, fear and stress for a prolonged time can drastically affect our physical and mental health. It can lead to several anxiety disorders like panic disorder, obsessive-compulsive disorder, post-traumatic stress disorder, etc. Brahmi is used as a nerve tonic by Ayurvedic practitioners for since long.

Consumption of Brahmi syrup was found to be effective in reducing the level of anxiety and associated symptoms. Brahmi is also found to significantly reduce stress levels.

Inflammation is our body’s natural response to fight external diseases which may have entered. Sometimes, cases of chronic inflammation may be linked to serious diseases like diabetes, cancer, and heart disease. One of the benefits of Brahmi is that it could prove to have anti-inflammatory qualities.

There have been studies done in test tubes and on animals that reveal Brahmi’s efficiency in stopping the release of pro-inflammatory cytokines and restricting enzymes which play an important role in facilitating inflammation respectively.

Alzheimer’s is a neurodegenerative disease associated with loss of memory. Brahmi was found to be neuro-protective and effective in Alzheimer’s disease and other diseases with cognitive impairment.

Brahmi improves our brain functioning and enhances both short-term and long-term memory.

Inflammation is our body’s natural response to fight external diseases which may have entered. Sometimes, cases of chronic inflammation may be linked to serious diseases like diabetes, cancer and heart disease. One of the benefits of Brahmi is that it could prove to have anti-inflammatory qualities.

There have been studies done in test tubes and on animals that reveal Brahmi’s efficiency in stopping the release of pro-inflammatory cytokines and restricting enzymes which play an important role in facilitating inflammation respectively.

Sleep is extremely essential for physical and mental relaxation and rejuvenates us. The fast-paced life, stress, unhealthy eating and sleeping habits disturb our sleep pattern, leading to insomnia and other sleep disorders.

Consumption of Brahmi calms us. It effectively reduces stress and anxiety. Brahmi at bedtime induces sleep and is helpful in insomnia.

Stress and unhealthy eating habits lead to a rise in cases of high blood pressure or hypertension. Such patients are further susceptible to heart diseases, stroke, congestive heart failure, etc.

Attention deficit hyperactivity disorder (ADHD) is a neurodevelopment disorder that shows characteristics like hyperactivity, impulsiveness, etc. Some research studies show that one of the health benefits of Brahmi may include reducing ADHD symptoms.

One study showed that 225mg of Brahmi for 6 months straight reduced certain habits like restlessness, inattention, etc. Another research revealed that a blend of Brahmi helped improve attention and cognitive skills. Although these studies were done on a small scale, the results are promising and only more large-scale studies can tell us for sure.

Brahmi is a usual constituent of hair oil as it nourishes the hair roots, strengthens the hair and prevents dandruff.

Brahmi was found to be effective in the management of diabetes mellitus.

Epilepsy is a disorder of the brain with learning, cognitive and memory impairments.

Brahmi is a wonder herb known to enhance intelligence.

It increases alertness and concentration. It also improves memory.

It is known to cause bronchodilation, thus helping patients with asthma to breathe better.

How to use Brahmi

You can find it readily available online or in health food shops. Studies reveal that a human should typically take around 300-450mg per day. Brahmi can be found in capsules and powder form. You can mix the powder with hot water to make a cup of tea, or even mix it with ghee to make a herbal drink of sorts.

Here are few ways and processes by which Brahmi can be consumed:

Make a paste of Brahmi leaves, or, add it’s powder in any hair oil. Massage it on your scalp. Leave it on for an hour and wash your hair with normal temperature water to reduce headache. This also provides relief from stress, and induces sound sleep.

Take 1 teaspoon of Brahmi powder, mix it with rose water and make a paste. Apply it on acne-prone skin, areas of skin irritation and, on skin burns.

Take leaves and stem of Brahmi, crush them, and make a paste by adding some water in it. Now, squeeze the paste and filter it using a sieve to get it’s juice. Consume it for instant effect to aid in a variety of ailments.

Add ¼- ½ teaspoon of Brahmi powder in ghee while cooking vegetables, for proper digestion.

Consume 1 teaspoon of Brahmi powder with honey to get rid of cold and cough.

1 gram of Brahmi powder when taken with Ashwagandha powder in milk, every night, is for good immunity and maintaining proper health.

1 gram of Brahmi powder with ½ teaspoon ghee if consumed daily in morning, is helpful in improving alertness and concentration.